“Yoo hoo! Yoo hoo!” shouldn’t be threatening, but check out this chart, and if you want, read the story below. 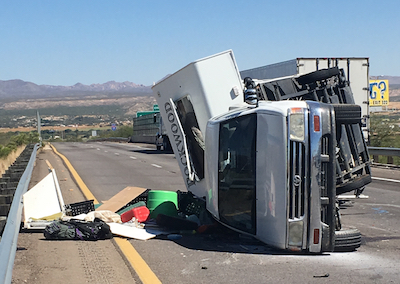 Three and a half years ago, seven weeks before (I believe) my truck was remote controlled to crash on the highway, it was the Solar Eclipse / New Moon, when a strange woman interrupted my meditations, hollering up the mountain to me, “Yoo hoo! Yoo hoo!”

I ignored her until I saw a man carry heavy equipment toward my truck and disappear behind a bush next to it where I couldn’t see him.

I yelled at him, “Get away from my truck!” at which point the woman began calling out that they were going to town and wanted to know if I needed anything. I repeated my demand, but it accomplished nothing. I thought of running down there, and could have easily, but oddly (except for a mind control subject), I felt immobilized and afraid to confront them more closely.

Six weeks later, my truck and trailer made an “impossible” fish-tail movement on flat highway, then made the same impossible movement again the next time I took the rig out one week later (week seven), and I made a mental note to take it to repair- even though everything had just been checked and maintenanced

Half an hour later, it made the same movement, this time down a hill. I’d experienced mild fish-tailing a couple times on steep hills and knew how to easily pull out of them, but this was not a serious hill and none of the conditions should have caused that.

Quickly, my truck and trailer were overwhelmed by extreme fish-tailing which flipped them, destroying them both, leaving me with a concussion, severe whiplash, homeless, with all my possessions in a mess. It was one year (minus one day) since I’d purchased my rig.

When I awoke in my truck, hanging sideways in the restraint, a trucker came to help, and later another trucker came. Oddly, they both used exactly the same language with me, and I assumed they’d both attended the same class on how to respond to highway accidents.

However, I also watched them both “interfere” with the crash scene, spraying fire retardant under my truck, which it didn’t need, while “checking” the wheels and axles.  I now think was a cover for removing the remote device that flipped my rig.  They’d also parked their trucks so that no one could drive by them and see my rig.  (Later, I came to wonder if one of the truckers had also directed my crash by remote control.)

Recovery (physical, mental and financial) has been slow, and I don’t think about the event much, but today I am because of the “Yoo hoo” woman who visited yesterday.

I’d never realized I’d crashed just a day away from my rig’s one-year anniversary until last night.  But I had been aware of the seven-week span between the “Yoo hoo” woman and strange man at my truck and the truck-and-trailer’s crashing.

And now, the “Yoo hoo” woman yesterday made me realize I just passed the seven-week mark before my one-year anniversary of purchasing my current rig.  Should I be counting down the next seven weeks until their next harassment?

As I’ve taken care of the annual maintenance this spring, I couldn’t help but wonder now and then whether my Targeters were planning on taking my home away from me again, now that I’ve perfectly maintained it.  But I brushed the idea aside – until the “Yoo hoo” woman visited.

To add to the freakishness of this whole thing, she mentioned her son living in Hawaii (I have a son who lives there), and she was wearing her hair exactly like mine at the moment – in a ponytail with an extra band at the bottom!  Makes me accept they have cameras to watch us TI’s in our rigs.

Sitting down with paper and pen, I charted out the details roiling in my brain and found all these New Moons and sevens and anniversaries are not random, but perfectly orderly.  And so I created the chart above.

I hate to admit I believe I’ve been harassed by Satanists a fair amount all my life. I was born under a Full Moon, not just in the 24-hour period, but within 8 minutes of perfection (2/1000ths of a degree). I was also born on 7-7-52 – which adds up, of course, to 7-7-7, which I’m told Satanists love, along with the fact that my birth date was Monday (Moon day), in the middle of Moon Child, as well as the Full Moon.

My mother’s church that I attended as a child was supposedly respectable, but I believe many churches have Satanic infiltrators. And these last few years on the road, I’ve found myself occasionally traumatically disabled for extended periods of time, and I realize a day or two later it had begun on the Full or New Moon when I’d met unpleasant strangers – with Satanic iconography I’d ignored!

Since I’ve been a nomad, the weirdness has had lots of variety, as I assume my peripatetic wanderings cause the Targeters to have to act on the fly and use whatever secret network is available on short notice, and so I experience a little less harassment, of a varied sort, but including “games” by Satanists.

I’m posting this in hopes it’ll blow Their cover, expose their Satanic games-playing and save my life (and rig).

If anything should happen to me six or seven weeks from now, especially if it involves my truck and camper, I hope everyone will recognize a crime has been committed.

You can bet I will be parked and go NOWHERE that week. And I’ll be praying for protection, and welcome you to pray along with me and for me. (Put it in your calendars!?)  Thanks.

I believe these are spiritual warfare lessons I’ve been failing, and I pray to learn my lesson now and keep myself safe.

Crazy times we live in….  Reminds me:

“And demons will be let loose on the Earth in those days.”