Today, we took a walk around an acquaintance’s property, and at the very beginning of the walk, I spotted one – and then two – desiccated lizards which I picked up to carry home.

I like lizards.  They do insect control, are neat and clean, and are symbolic of the dreamtime.  And I’ve had many good experiences with them over the years – and one experience that felt tragic to me, in which I accidentally killed a large mama lizard full of eggs (all recounted in my book).

Of course, I’ve always felt glad when I’ve been able to save a lizard trapped in some sort of container it can’t climb out of, when still alive and able to recover from its temporary imprisonment.  That happened a lot at my old hermitage.

Once a lizard refused to leave my hand but ran up my arm and rode around with me on my shoulder for almost an hour until I insisted it return to the garden.

Two days later, I found two lizards (similar to the first hitchhiker, so maybe the one told its buddy about me) hanging on the back of my shirt.  Since I’d been on my feet for hours, I could only assume they’d jumped onto me from the doorway of the screen porch where they liked to hang out for cooling breezes.

Since mystical experiences often occur in threes, I wondered when I found the first and second desiccated lizards this morning, Would there be a third?

Within a short time, we came upon a baby lizard hanging – improbably – up-side-down by the tip of its tail, suspended by a spider web he’d partially destroyed and deformed so that the entire web pulled down with its lowest point a twisted thread of sticky strands wrapped around the scaly tip of the lizard’s tail, leaving the baby lizard dangling helplessly in the air.  It wiggled its legs, so we knew it was alive.

I held my hand up and let the baby lizard climb on, then with fingers of my other hand gently pulled away bits of web still wrapped around the tip of its tail.  In seconds the lizard was free.  Like the other rescued lizards, this one didn’t seem interested in leaving my hand, so I was able to carry it to a convenient tree branch 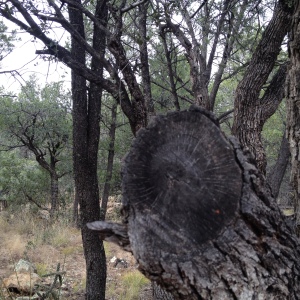 There, the baby lizard obliged, but turned around to look at me.

I put my face right up to the branch – and the little one stepped forward toward my face, so I leaned in too, and we nearly touched noses.  I assume he or she said thanks, and then I turned and we went on our way.

Later, I returned to photograph this stump where I deposited and last saw the little thing and looked around a bit in case it was nearby, but didn’t see it.

At home I took this photo of the two dried heralds of the life-saving event.

Blessings to you all on your walks in Nature today ~

2 thoughts on “Friday Random Beauty: Saving the Life of a Lizard”