So, this is what it’s like to live on a planet with everyone overwhelmed and mind controlled.  I wouldn’t have believed it if I hadn’t seen it with my own eyes.

~ Corporate control of governments and economies

~ Most water poisoned or sources destroyed

~ Land poisoned from pole to pole

~ Food genes modified to not reproduce

~ The “free press” controlled by corporations

~ Terror constant around the globe

~ Slavery, including child and sexual slavery, growing and ignored

~ Wars and threats of war

~ Biological and technological weapons beyond our understanding

~ Earthquakes and toxic water from fracking

~ Most Americans, and many children, on mood-altering drugs

So, why are we still talking to politicians?

Because we’re dependent on their system.

I am absolutely certain we cannot negotiate or fight our way out of this.

So I have two hopes for survival:

1) The two opposing, entwining forces on this planet will be in such disharmony that we will break apart into two different dimensions, each in our own vibration.  Those who believe in slavery or are willing to be controlled by others will go one place, and those who appreciate the stability and endurance of diverse ecosystems, noted for mutuality, and cooperation – and who have made it part of their life to nurture those qualities – will go into another dimension.

Sorta like the Rapture.  Or sorta like I once heard that Hopi mothers tell their children, “One day, the bad people will just be gone.”  So many prophecies of endings and new beginnings….

Or maybe it’ll just end in some manner beyond our imagination.

2) Or maybe we’re learning something from this horror of watching an entire planet under threat (though we in the United States remain relatively well for now, relatively oblivious of the masses at war and dying).

What if we’re souls being taught to be responsible by having our actions reflected back on us collectively?

Since we keep animals in pens, “They” put some of us in pens.  We feed animals our waste; They feed us crap.  We treat animals like things; They treat us like things.

Could this be a house-of-mirrors dimension, and if we’d change our ways, our conditions would improve?

This theory has a certain elegance, but it’s rather constructed.  On the other hand, there do seem to be dimensions of reality that are constructed, if you believe the shamans, which I do.  Dimensions of inorganic beings, thought forms, memes, mathematics, fractals, etc.  So, like Carlos Castaneda trapped in the world of the inorganic beings, our entire planet might be trapped by an idea (capitalism?) – an idea that, unfortunately, reflects back on us and hurts.  It resonates with me sometimes as too true a possibility.

If that’s the case, then the tales of Jesus and other aliens returning to rescue, save, or rapture us seems hopeful.  I resonate with Christ, so I pray he picks up my signal and has me in his plans.  I’ve promoted cooperative living most of my life, so I’ll accept a rescue from my spirit family, if that turns out to be the reality. 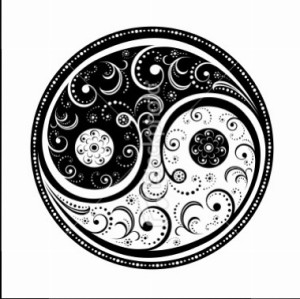 Okay, one more:  The worst, most evil-feeling thought I have cross my mind sometimes is that the System, evil as we think it is, is intrinsic to human evolution.  It’s half the driving force of things, just like the yin-yang symbol.  Just like a tree, half in light, half undergound, consuming dead things.

And just like the human body can’t have toe cells demanding a better gig, we gotta have people who fulfill their jobs exactly, and if it takes mind control, then so be it.

(I could almost talk myself into the necessity of this, except that the System is systematically destroying the planet and devastating souls.)

I can understand Life including Death, but I think we can evolve without the depths of depravity we have here.

On the other hand, if all this nastiness turns out to be actually necessary for our evolution, then I have to let go of my idea of the Creative Force as a thing of elegance, harmony, and love.

On the other hand again, there’s an awful lot on Earth that is explosive, crashing, rotten….and it’s natural and seems necessary.  So maybe this is just life, and we’re supposed to accept it.  Ugh.  As I said, Worst theory.

4) Finally, I can accept that, since we are genetic experiments, we might just be too imperfect, too much trouble as Enlil thought (and Jehovah), and they’ve been threatening to wipe us off the planet for thousands of years.  We’re Their herd, crop, failed genetic experiment, facing our end.

Now, they might keep a few good slaves or other useful specimens, in which case there’s nothing I want to do but convince them I’d be way too much trouble and they don’t want me.  I believe our souls have other lives beyond this one, so I’ll emerge somewhere; doesn’t have to be here….

If I think of more reasons for hope, I’ll add them.  What are yours?